Before using any service, ask this.

We have a dream! A futuristic & successfull Malaysia National Transformation 2050!

The much anticipated TN50 ceremony to present the aspiration-filled Youths Canvas to Prime Minister Datuk Seri Najib Tun Razak took place at MITEC and this will be the big story of this issue of Bulletz. We’ve also provided updates on our upcoming CSR programmes and, of course, the Young Leadership Transformation Bootcamp event. Check out our latest edition and visit our website for more information.

A new corporate social responsibility (CSR) initiative is in the pipeline with IPEC Bureau and ASTRO. The programme is designed to help the poor in the Tuaran area in Sabah. Both parties discussed this initiative – which is part of ASTRO’s e-kasih programme – with Tuaran MP and Minister of Science, Technology and Innovation, Datuk Seri Panglima Wilfred Madius Tangau, who leads this initiative.

e-kasih is an ASTRO effort to provide FREE NJOI services to the poor under the Implementation & Coordination Unit (ICU) of the Prime Minister’s Office. IPEC and ASTRO visited Tuaran to feasibility studies and also visited the Kiulu’s Sekolah Kebangsaan Lokub Tuaran. IPEC and ASTRO will join forces to provide essential educational content to uplift the community and improve their prospects for the future. 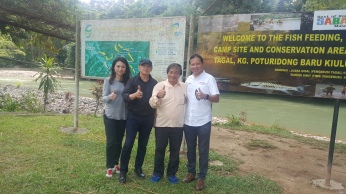 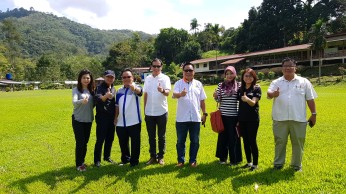 Michael is a Lean and Six Sigma Practitioner, a corporate consultant and trainer for numerous industries, with clients from all over the world. He has more than 14 years of in depth knowledge and experience in Operational Management and Business Excellence.

IPEC Bureau and CBSI inked a Memorandum of Understanding yesterday to promote mutual co-operation and explore opportunities beneficial to both parties. “This strategic co-operative initiative is geared towards charting a new direction for regional SMEs,” said IPEC Bureau’s CEO Dr Juliana Lim. “The ISO/IEC 17024 Certification of Persons will prove to be of great value, especially in creating new employment opportunities, new businesses and quality professionals,” she added. CBSI is a consultancy firm that specialises in the Halal industry and provides Corporate Advisory for public and private entities. CBSI was represented by Managing Director Datuk Yong Teck Shing, and CEO Dr Azmi Bin Hj Mohd during the MoU ceremony. 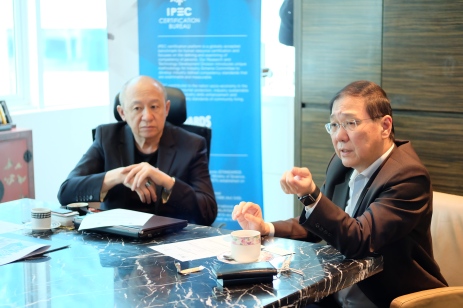 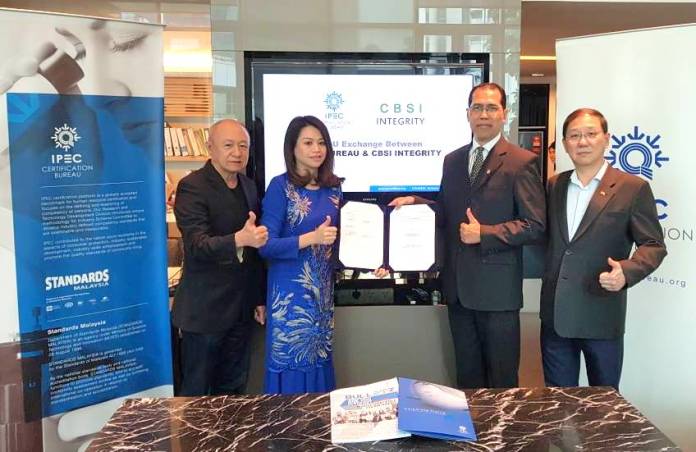 The MyIPEC project is the focus of the latest edition of Bulletz . Where the Impartial Committee is concerned, Professor Dr Wan Mohtar Wan Yusoff was officially on board this month!

The MyIPEC project was recently presented to the Ministry of Science, Technology and Innovation. The team consisted the Technology and Patent IP Manager, ICT Innovation Chief, Scientific Researcher and Project Management Experts.

The core responsibility of the team is to execute the technology integration for the MyIPEC project’s radical people certification solution that forms a ground breaking social innovation supply chain for the national economy.

Jobs was a of the key aspect of the presentation, especially job creation, future Jobs, global talent mobility and mentoring / counselling. The presentation also touched on calibrating the local environment for more accurate data and metrological testing.

The MyIPEC team is expected get into full swing and deliver all the committed output throughout the 24 months of the project, which is spread over five milestones.

Ever wondered what jobs will be like in the future? It’s predicted to be unlike anything you have ever seen or even imagined. Technology is storming through every aspect of life to a point where genuine fears for jobs and careers are at fever pitch. And for good reason too. Automation has redesigned the architecture of many industries and, in the process, wiped out millions of jobs in retail, manufacturing, etc.

While it’s understandable that many fear the rise of the machines, thanks to numerous doom and gloom predictions put forward by some experts and research agencies, there are equally those whose opinion of the future is less bleak – it’s more about current jobs being redefined or reinvented rather than entirely disappearing.

British author, speaker, and independent adviser Richard Susskind, in his book The Future of the Professions: How Technology Will Transform the Work of Human Experts said intra-professional friction is likely “when, for example, nurses take on work that used to be exclusive to doctors, or paralegals are engaged to perform tasks that formerly were the province of lawyers.”

The Future of Jobs report by the World Economic Forum, released early last year, also shares similar sentiments. Its findings, among others, states “given the rapid pace of change, business model disruptions are resulting in a near-simultaneous impact on employment and need for new skill sets, requiring an urgent and concerted effort for adjustment.”

It adds that “so far, the debate on these transformations has been sharply polarised between those who foresee limitless new opportunities and those that foresee a massive dislocation of jobs. In fact, the reality is likely to be highly the specific to the industry, region and occupation in question and the ability of various stakeholders to successfully manage change.”

It’s also worth noting that while some jobs are at risk of ceasing to exist, there are those that will continue to power through,and many new ones created. A study conducted by Oxford University indicates that jobs such as physicians and surgeons, preschool teachers, nurses, lawyers, chefs and head cooks are less likely to be susceptible to computerisation.

Another impressive report that produced eye-opening findings is Realizing 2030 published by Dell Technologies. Among the key highlights of the research, led by the Institute for the Future,includes:

• In 2030 humans’ reliance on technology will evolve into a true partnership with humans, bringing skills such as creativity, passion and an entrepreneurial mindset. This will align with the machines’ ability to bring speed, automation and efficiencies, and the resulting productivity will allow for new opportunities within industries and roles.

• By 2030 personalised, integrated artificial intelligence (AI) assistants will go well beyond what assistants can do now. They’ll take care of us in predictive and automated ways.

• Technology won’t necessarily replace workers, but the process of finding work will change. Work will cease to be a place but a series of tasks. Machine learning technologies will make individuals’ skills and competencies searchable, and organisations will pursue the best talent for discrete tasks.

• An estimated 85% of jobs in 2030 haven’t been invented yet. The pace of change will be so rapid that people will learn “in-the-moment” using new technologies such as augmented reality and virtual reality. The ability to gain new knowledge will be more valuable than the knowledge itself.

Digesting these facts and figures and many countless others out there, the recent two-day Global Entrepreneurship Summit (GECommunity Summit) 2017, held at Kuala Lumpur Convention Centre, themed “Designing The Future” was a timely platform to bring forth essential future-shaping discussions on topics such as social innovation, artificial intelligence and machine learning, and smart cities.

As the National Transformation 2050 (TN50) ambassador tasked with playing a major role in Malaysia’s Futuristic Human Capital Revolution, I was pleased that the GECommunity Summit 2017 helped stimulate new ideas which will go a long way towards nurturing entrepreneurs and highly talented workforce in Malaysia and the ASEAN region.

World renowned physicist and futurist, Dr Michio Kaku was among the Keynote speakers and his delivery stressed on science as the engine of prosperity and AI, nanotechnology and biotechnology, as three key factors that will revolutionise society as they will eventually merge in the future.

Under the TN50 initiative, Science, Technology and Innovation will shape Malaysia’s progress over the next 30 years by instilling a futuristic mindset into every generation to be well-equipped to deal with MEGA-TREND challenges, particularly the 4th Industry Revolution for Digital Transformation and Robotics (Industry 4.0).

Foresights shared by experts on demands for future certification to future-proof employment and career opportunities provided invaluable takeaways for IPEC Bureau as we are constantly striving to enhance the standards of current and future human capital in various sectors through our certification schemes, engineered to overcome the challenges of the future.
Further to this, IPEC has also embarked on a radical people transformation solution called, the MyIPEC project. MyIPEC is designed to form a ground-breaking social innovation chain that utilises validated / accredited data, social media, mobile apps and other technologies to empower the futuristic human capital revolution.

I’m confident that MyIPEC will firmly connect with communities and inspire them to fuel social good, particularly in removing economic barriers of the industry against both societal development as well as the need for nurturing talent and workforce requirements. In a nutshell, we will be able to give crucial foresight of the futuristic hybrid social development.

The robots are indeed coming and will create uncertainties and unrest where job security is concerned. But ultimately, society controls its own destiny through its commitment to embrace empowerment to deal with the waves of automation – that will continue to pound us for years to come – and gain a competitive advantage.

Team members of the MYIPEC Project attended the Electro-Photonic Imaging (EPI) / Gas Discharge Visualization (GDV) training from 26 – 28 January at the PAUM Clubhouse. The training, conducted by Russian scientist Dmitry Orlov, was an intensive three-day session incorporating the practical understanding of the use of EPI/GDV devices, its technology theories and workshop.

This development is the result of a MoU signed between IPEC Bureau and EPI/GDV development company Osaühing Bio-Well-KTI from Russia at the NICE 2017 Expo. EPI/GDV – developed and patented by Russian Innovative Technologist Professor Dr Konstantin Korotkov – is a technique similar to Kirlian photography.

MYIPEC is a radical people transformation hybrid solution to form a ground-breaking social innovation chain. MyIPEC’ will be developed with EPI/GDV patents in the human capital global mobility context. 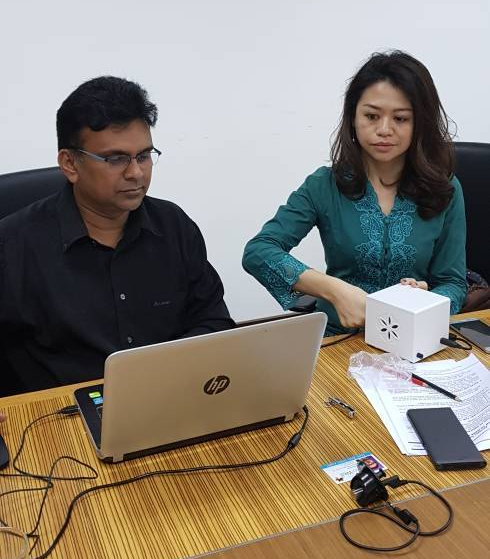 IPEC Bureau held a service excellence meeting at Vida Ceylon on 19 January 2018, led by the Head of the Business Excellence Industry Scheme Committee, Mr Michael Wong. The meeting is a crucial one that discussed the development and progression of the Service Excellence Certification Scheme and the technicalities of competency, examiner and examination criterion.

The scheme is expected to be completed and fully functional later this year. IPEC’s Chief
Executive Officer Dr Juliana took the opportunity too address the committee with updates and some findings from the Standards Malaysia’s accreditation audit of the Lean Six Sigma certification scheme which took place recently. The planning for the foresight of the Lean Six Sigma Certification for 2018 was also discussed. 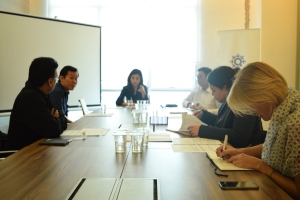 Professor Dr Hj Wan Mohtar officially takes on the role as the newly elected Chairman of IPEC Bureau’s Impartial Committee. Here, he shares his thoughts on his vision and direction for IPEC from 2018 and beyond.